I choose to focus on who you are and what you are able to do ABOVE what my situation appears to be.  You are greater than my situation!

I choose to focus on that truth and remain encouraged--no matter what.

I choose to speak confidently to my situation because I trust that you know and want what's best for me.

Finally, I thank and praise you for the opportunity to choose.

Love,
Lou
Posted by Loureva at 9:48 AM No comments: 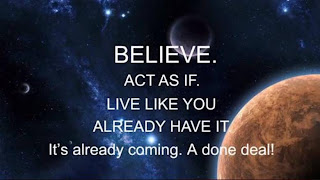